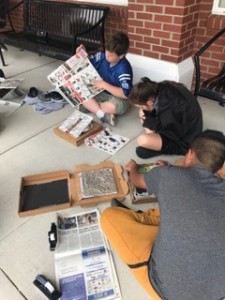 Due to weather, our 7th graders had to change up our plans at camp today. Originally, we were going to visit a farm, but instead we stayed at Johnson and had a blast with our campers! We started our day with a trivia game. Our campers were SUPER competitive which made it all the more fun! We later created solar ovens in which we made s’mores. The dreary weather didn’t melt the marshmallows as much as we had wished, but our students had a great time together. We finished our day with camp awards, and the campers and counselors signed each others’ camp shirts.
Despite the rain, we had a fun-filled day with our 7th graders. Tomorrow is our final day filled with kayaking and a banquet to sum up our time together.
Written by Sarah Hume

Today we had the opportunity to learn a little bit about the history of East Tennessee! Our students visited First Presbyterian Church downtown Knoxville and learned about some of the founders of Knoxville who have been buried there. We learned about James White, William Blount, and many others who contributed to the founding of Knoxville! We also toured the beautiful sanctuary and talked about how the church building served as a hospital during the Civil War.
After having lunch at World’s Fair Park, we played some kickball! We then toured the East Tennessee History Center and learned about the role East Tennessee has played throughout history. Students learned about the Cherokee Native Americans, Dolly Parton, the TVA, and the division the Civil War cause in Tennessee. Our tour guides were phenomenal in providing interesting stories and facts about the history of our city and our state! Tomorrow is our last day of camp and we are excited to make it the very best for our students. Thank you for all of your prayers and support!
Written by Bridget Cooper